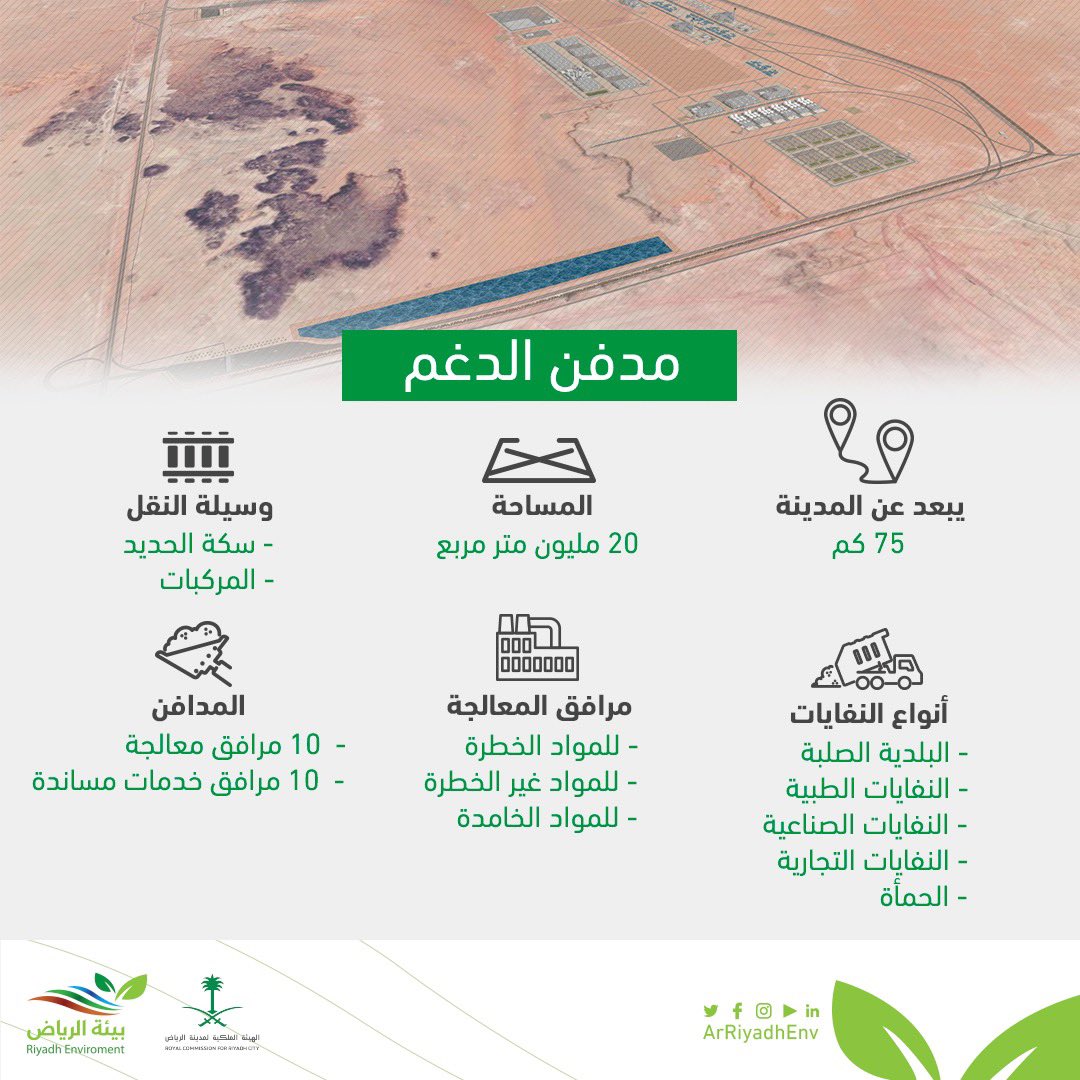 A safe and sustainable future in waste management in Riyadh city

Over the years, Riyadh has witnessed a monumental increase in population growth and urban density. This has brought forth certain environmental challenges, such as an increase in the amount of waste generated. The Royal Commission of Riyadh has prepared a comprehensive strategy to deal with this issue head on. To deal with the negative impact of landfilling, sustainable ways of managing waste were implemented and the Al-Dagham facility was established.

The waste facility of Al-Dagham lies outside Riyadh city where final treatment and disposal of solid, medical, industrial and commercial municipal waste and sludge takes place. This new site is about 75 kilometres from the city and spread across 20 million square metres. It was specially designed to treat waste of all kinds and keep pace with Riyadh’s increasing demands of waste disposal till 2045. The area is expected to be expanded later on.

The landfill also includes different operational areas for various types of wastes. After collecting and sorting the waste, each type is transferred to the designated for treatment. This process produces methane gas which is used to generate electrical energy.

In the recyclable material recovery unit, recycling containers are segregated as per their contents: paper, cardboard, astic, metal, glass and wood. Once processed, they are transported to different industries to be used as raw materials.

In the incineration unit, organic compounds are exposed to high temperatures which turns them into ash. This ash is used in construction while the gases produced are used to generate electricity. Similarly, hazardous waste and medical waste are also incinerated in their respective units to produce environment friendly ash.

Some types of medical waste use the Autoclave technology by pressing high pressure water vapours at high temperatures to kill infectious microbes. Microwave technology uses radiation to do the same and turn the waste into safe solid waste.

There is also a dedicated unit for automobiles and their damaged parts which converts them into raw materials, like extracting rubber from tires to be sold separately. The mechanical processing unit also recycles and treats waste to be used as raw material or generate fuel for energy production.

As this integrated waste management system works like a well-oiled machine, The Royal Commission of Riyadh hopes it will bring tremendous environmental health benefits to the city. After all, there’s nothing better than a clean and hygienic city.